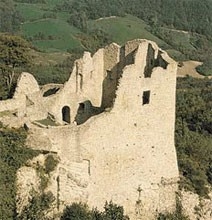 Canossa Castle is located in the town of Canossa in the province of Reggio Emilia , ground on the cheese.

By car : From the A1 motorway - Reggio Emilia : tangential direction Parma , after the first roundabout follow the direction Parma Viale Martyrs of Tienanmen . After the first bridge turn right in via Nagasaki and right again on Via Hiroshima . Follow Via F. Chopin direction Montecchio -Cavriago . At the roundabout continue on Viale England aqueduct direction Rivalta - La Spezia SS 63 , from Rivalta follow for Quattro Castella - San Polo SP 23. From San Polo follow to Ciano d' Enza . Reached the center of Ciano d' Enza , turn left with direction Rossena - Canossa SP 54. Continue for Canossa and turn left on SP 73. Follow the signs to the Castle of Canossa .
Canossa was undoubtedly a key connection point in the ancient road system.

Research conducted at the site has allowed the discovery of traces of Roman settlements.
In the case of some fragments of handle bricks and large tiles, now on display in the local museum, it was concluded that these are recycled from some foothills and reused for the construction of the castle or at some reconstruction of the same.

But the discovery by Gaetano Chierici of flooring range of earthenware (small) covered with a medieval paving, suggested the presence on the site of a Roman settlement.

The Campanini had highlighted that the floor in the drawing he made of the plant site, but did not manage a gradual deepening of the investigation.

In 1894 prof. Tito Bentivoglio Society of Naturalists of Modena decided to analyze fragments of the floor, and concluded that the three layers that formed it corresponded to those testificati detail by Vitruvius in his treatise De Architectura.

Moreover, the presence of Roman settlements in that place is not unjustified when one considers that the Via Tabularia Brescello-Luceria, at the foot of the cliff, was already in ancient times the connection required between the north and south of the peninsula

Full price: € 3.00
REDUCED : € 1.50 ( EU citizens between 18 and 25 years )
Admission is permitted FREE :
a) under 18 and teachers of state role
b ) tourist guides in the exercise of their duties, by showing a valid license
c ) tourist interpreters when their assistance is required alongside the guide , by showing a valid license
d ) personnel of the Ministry of Culture and Environment
e) members dell'I.C.O.M . ( International Council of Museums )
f ) journalists , after performance of the document certifying the work done
g ) the first Sunday of each month

The ruins of the castle, which are located on a rugged cliff behind the town of Canossa, between the river and the river Crostolo Enza, dominate the landscape with a broad view of the valleys below.
The rock of Canossa, from the geological point of view, consists of limestone Oligocene, and rises 576 meters above sea level.

The fortress has been a source of inspiration for poets and storytellers. Ludovico Ariosto, who stayed there, in the Orlando Furioso described the rock on which he imagined this becomes enchanted fortress of Atlas.

Naborre Campanini argued that "the surface of the peak measured in the maximum length of 80 meters in width and 30 average: the perimeter does not exceed 1200 and the entire area was estimated just over two thousand square meters, less than a third of the ancient for landslides devices that maximum from morning, noon, and from the west, have eaten up the cliff. " The area occupied by the complex was, however, "convenient and sufficient to a great castle" especially in view of the fact that "Canossa was a fortress, not a palace signoresco created for the comforts of life quieted at leisure. The same Matilde He lived there only at short intervals, and it 'dangers; while commonly stayed at Carpineti, in the castle building from her, where he gave the ordinary his court. "
Along the Apennines Reggiano, between courses Enza and the Secchia, many fortified structures are aligned according to prearranged directions, reaching, in parallel, to different elevations, the border of Tuscia.

The castle of Canossa stood in a strategic position along the end of the Apennines between Parma and Bologna, where flowed the most important roads of northern Europe to Rome, via the Brenner, Simplon, Gotthard, the Francigena that of San Bernardo.
Do not forget that in medieval times the journey had taken a particular connotation: thousands of pilgrims decided to deal with, by land or by sea, long distances, difficult and tricky to reach the places of the faith, because the so-called "paths of heaven" They constituted the maximum fine existential individual.