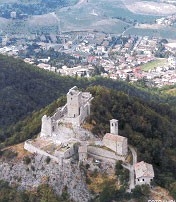 Accessibility
Distance from Carpineti centre: 2 km, taking the SP 76 in the direction of Colombaia.

Description
The natural defense offered by Mt. Antoniano, 805 mt. Tall, suggests that the origins of a former walled enclosure date back to the age of Hungarian incursions. Foundation of the castle is instead attributed to the Atto Adalberto of Canossa. From the IX century Carpineti was in fact cited in the sources, while as in the XI century a few documents mention it as seat of battles. In 1043 Marquis Bonifacio of Canossa administers the castle, but it will be Matilde who will enhance the entire complex. Inside the fortification, equipped with a double order of enclosures, the countess orders the construction of the small church of Romanesque style dedicated to St. Andrew. The Carpineti fort was elected as privileged seat to host Pontiffs emperors, kings, and dukes they stipulate agreements on the fate of Italy. In 1077 it received Pope bishop of Lucca, Inselmo. In 1092 Matilde gathered an assembly of bishops, prelates and monks in the Carpineti castle, intending to solve the war against the heretics. The death of Matilde (1115) ends the most dense period of events in the history of this castle, contended between the Papacy and the Empire. From 1117 the castle became the residence of different lords who succeeded in the government. In the last decades of the XII century, the Carpineti fortress was subject to various assaults and different lords succeeded each other in governing. Among these were also the legendary 2mountain bandit2 Domenico Amoretto. The precarious and disastrous conditions that the castle was in, after years of neglect and assaults, were accentuated by a fire in 1944, following a German offensive. The structure of the complex can be referred to as a "castle enclosure" with an irregular wall plan similar to a trapezium. On the southern side there's a small apsed area which takes the shape of a large round tower through which you entered the castle. Inside there's an isolated tower with square layout constituted by well-squared stone blocks. The windows with arches in the center, located on the southern and western sides and the one in the northern façade, suggest a dating not later than the XIII century. At about 4 km from the castle there's an oratory that recalls the ancient parish of S. Vitale delle Carpinete, repaired by countess Matilde, and of which traces of carved decorations remain. The parish was also called "San Vitale da Verabulo" from the same name court which Beatrice, Matilde's mother, had given to the monastery of Frassinaro in 1071. Mighty ruins of the castle remain, dominated by a ruined square tower on the peak. The complex of Carpineti today, besides being constituted by the ruins of the castle, also has the Sant'Andrea church, the small graveyard and the hamlet.
The entire structure was restored from 1990 t the first months of 1999.