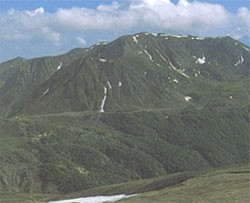 Accessibility
Mount Prado is found in the province of Reggio Emilia, on the border between Emilia-Romagna and Tuscany. It can be reached from Milan and Bologna taking the Autoroute A1 up to the exit of Reggio Emilia or Modena Nord and then the SS 63 that leads to Villa Minozzo. From this point it's possible to follow the road that leads to Febbio and then to Civago (in the direction of Radici Pass). From Civago you take the road that goes above the town, in front of the valley, on the hydrographic left and, after a narrow part, you turn right towards "Case Cattalini". After a few kilometers the road is no longer paved and leads to a beech wood with white spruces called "Abetina Reale". On the bridge of the Dolo torrent you have to continue by foot, and after an hour and a half/two hours you get to the base of Mt Prado. The so-called Segheria refuge is situated where you park your cars.
(0522/8072227 while the C. Battisti refuge (0522/897497), run by CAI of Reggio Emilia, it's on the valley that joins Mt Prado and Mt Cusna.
You get to Mt Prado on the following paths:
- from Pradarena: CAI path 00 (5 hr)
- from Case del Dolo: CAI path 631 (3 hr)
- from Ligonchio: CAI path 633-631 (4 hr 30')

Description:
Mount Prado or Prado (2054 m) is located on the major dividing line of the Tuscan-Emilian apennines, half way between the Pradarena pass and the Radici Pass. This area is included in the Park of the Upper Reggiano Apennines (Parco del Gigante), since 1988, for its elevated naturalistic value.
The local climate is scarcely documented. The average yearly temperature is about 5°C and average precipitation is about 2000 mm. Precipitations are for the most part snow and take place between November and April, while snow melts from May up to the beginning of summer, based on the topographic and expositional differences. The geological substrata is constituted for the most part of thick sedimentary layers, with alternating layers of sandstone and marne, where the first one is of the so-called "macigno ". The Northern side of Mt Prado is characterized by typical geological glacial forms, such as cirques and morenic deposits, which originated during the Wurmian period.
The glacial morphology is evident: the glacial cirque has steep and rocky walls, while the base is leveled and crossed by at least three levels of morenic deposits, probably corresponding to the different stages of the glacial retreats and which enclose small humid areas and the Bargetana lake. A small glacial niche, where the snow often persists until the end of July, can be seen on the right side of the glacial cirque, at an altitude of 1850 - 1900 m. Furthermore, it is still active, especially in spring and fall. Mount Prado's Flora
In this general flora setting, Mt Prado in the Reggiano Apennines appears as absolutely on e of the richest areas flora-wise and was thus called in the past a true "botanical paradise".
The botanical exploration of Mt Prado is among the more ancient of the Tuscan-Emilian apennines. Calandrini's collections, whose results were then published by Carvel (1860 - 64) date back to the middle of the 18th century. Calandrini is to be credited for pointing out Seneciò incanus and Lychnis alpina, two of the most interesting flora presences of Mt Prado. In recent times the area has attracted the attention of various botanists who have dedicated specific botanical and vegetational studies in the area. (Alessandrini and Branchetti 1997, Flora Reggiana). Speaking of which, the "Chart of Mount Prado Vegetation" is to be remembered (G. Rossi, 1993), made on a scale 1:2000 and edited by the Parco del Gigante organization and the Emilia - Romagna Region. (Environment division). It represents further progress in understanding the vegetation of this area and presents itself as a synthesis of current knowledge on the upper forest vegetation of the entire Apennines. Vegetation of Mount Prado
From a physionomical stand point seven types of vegetation have been distinguished: forest vegetation with deciduous woods, especially beech wood, mini shrub vegetation with dominating blue berries (Vaccinieti), soprasilvatic prairie vegetation (detriti and crags), aquatic and paludian vegetation (streams, bogs and wells which dry up in the summer).