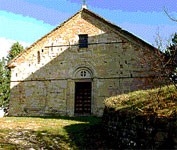 By car or bike.

Describing the Apennines as an area just waiting to be "discovered" is a bit of a cliché. But it's true, provided you get off the "beaten track" and the main roads, which are rarely enticing or kindle any desire to explore the area. One area especially deserving of "being discovered" is the one around Toano. It has the distinct feeling of a place in the mountains but is also bursting with relics from the past like many of the places with links to Countess Matilda of Canossa.