The Middle Enza Valley: the beach of Reggio Emilia 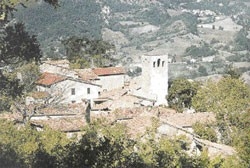 By car or bike

The Enza Valley is one of the most popular places in the province of Reggio Emilia with its own inhabitants. The beautiful landscape is gentle, in a way that makes it blend in with the same identity of the lower and medium Apennines. It is not monotonous, however, thanks to some touches of geological harshness and unexpected glimpses over the horizon, which is embellished by the outline of the castles. The network of Matildic fortresses and hamlets which still preserve traces of medieval towns and architecture, provide good attractions for tourists and walkers even from further afield. In the warmer period, its main attraction is, however, the river, which is generally clean and has a natural appearance. The restaurants which line the river banks (although good cuisine can also be found in the towns in the valley) provide an extra reason for visiting this fine border land between the provinces of Reggio Emilia and Parma (on which, up until the early nineteenth century, the majority of these places were dependent). For those interested, let us also add the tight network of footpaths and trails across the fields. They are partly signposted, sometimes well, often not, but it is difficult to get lost in any case. The numerous guidebooks which can be found in bookshops, at the town halls or in the tourist information offices are helpful. It is always advisable to obtain information before visiting the area.