A century of history in Vetto, a slice of mountain life 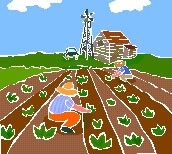 A century of history in Vetto, a slice of mountain life: History of life in Vetto

Description:
During the last century, with a few exceptions, patriarchal families from Vetto worked the land torn away from the gravely shores of the Enza river and the Lonza Torrent or from the woods, which in 1876, spread over more than 481 hectares. Besides wheat and maize (from which bread and polenta (cornmeal mush) was obtained, the farmers treated chestnuts in a special way, which produced ""chestnut cake", bread, sauces, "balleri" and polenta, roasted chestnuts, and was used to make staves for the barrels, agricultural tools and furniture, especially kitchen cupboards and chests. If the year was good, on October 28th they would go and sell the chestnuts at the San Simone fair at Montecchio. Usually the chestnuts were dried in rustic buildings called "Metati", in which a fire was always lit, and during the long autumn nights, were surrounded by townspeople who would come together to chat, laugh, joke, sing and tell tales. Supporting agriculture and silviculture (often, the wood cut in the bushes of Gottano was rafted along the Enza and would reach Ciano or San Polo where it was sold or brought to Reggio or in the major centers of the plains), was livestock rearing. Very little, actually, because, if different families raised sheep, the number of heads was always very limited and usually barely sufficient to supply milk for the children and wool for sweaters and other clothing for children and adults. For this latter need "the filino" was connected (in the evening, especially in winter, women of each hamlet would get together in a house or in a barn and start spinning, till late at night, chatting or singing) and weaving, as a tradition disappeared towards 1950, 1955. The increase in population, at the beginning of the 19th century forced many people from Vetto to emigrate to France where they found work, especially in the stone caves of Dramont, near Saint Raphael. Work was extenuating, but the silver "palancone" (big dough) which, at least once a year they were allowed to bring back to their country allowed their families to survive with less worries, to buy a part of a field or woods or a couple of cows or to fix their houses. The luckiest managed to be hired in construction yards or in restaurants in Paris or Versailles and, in a few years, transferred their entire family; The "French way" remained viable until the beginning of W.W.I when the war's events called many of the immigrants back to Italy and various drafts of young men to go to the front were enacted, which provoked even bleaker misery. In the meanwhile, to strengthen ties between Vetto and the nearby Parmesan Municipality of Nerviano degli Arduini, the "Ponte del Pomello" bridge was "thrown" over the Enza river, it was completed in 1914. During the 1920's, emigration to Milan began and was reinforced in the 1950's, it is now terminated. This time it wasn't the fathers who left, but the children, generally "Bocia" or girls 13 - 17 years old. The males worked washing dishes, as helpers at vegetable markets, in artisan studios, labor workers; the females worked as servants, waitresses or nannies in the homes of the rich. The period between the two wars saw the "piciarin" affirm themselves and the stonecutters who worked the stones extracted and cut (already at the end of the 18th century) especially from the caves of Faille and Tizzolo and appreciated for being "Alive" having a nice bluish uniform color, without graining or streaks and perfectly suitable for being reduced, with maul and quion and without waste, in almost perfectly square blocks. From these parallelepipidon, the artisans, local artists would make with hammer and scalpel, "bolognini" and angulars for homes and churches. From the bigger stones they would make pieces to build portals and archivaults or patrician dwellings in all of the Reggio area and also in other provinces and to erect monuments for the deceased, such as the one that dominates Castelnovo ne' Monti. To learn or teach the secrets of the trade, very expert stone cutters, even from Modena, Parma, or Veneto came up here. Once the second world war was over, "reconstruction" was slow and difficult: the economy languished, public and private initiatives were scarce, agriculture didn't pay much. Emigration was one of the few release valves for the many socio-economic problems that had come into being. So, if in 1951 the population almost reached 4,000 inhabitants, ten years later it had precipitated to 3,300. The period 1957 - 60, though, was marked by numerous public works: new roads to connect a few fractions between themselves and the administrative capital, reconstruction of the existing roadways, construction of bridges, aqueducts, sewage systems, electroducts, schools, telephone lines, urbanistic arrangement of Vetto and the principle fractions. At the beginning of the 1960's the Italian economic boom, even though not blocking emigration and the commuting of the Vetto population, put them on the track of modern agriculture, the reawakening of craftsman ship, to spurring tourism which could count on such natural resources as the Enza river and the wooded slopes of the Faille. After the "golden decade" of the local economy, 1969 -1978, and the recession of the 1980's, Vetto is now keeping in tune with the more advanced centers of the Reggiano Apennines, thanks to production of the superb Parmigiano-Reggiano, the valid receptional, sporting and recreational structures, to the consolidated summer and "passing though" tourism and to the productive and service oriented craftsmanship which is relatively extensive.