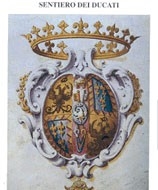 A path through dukedoms
From the river Enza to Lunigian

Province of Reggio Emilia and CAI

The "Sentiero dei Ducati (Path through Dukedoms) was originally the border between the dukedoms that separated neighbouring villages and valleys until 1848 and were continually crossed by travellers, pilgrims and smugglers.It runs almost parallel to the river Enza and starts out at Quattro Castella, before passing close to some of the more important locations, historically speaking, such as Canossa Castle and the Church at Pianzo; it reaches the top of Mount Barazzone and Mount Staffola, skirts past the splendid Tassaro river valley and visits the hamlets of Legoreccio, Pineto and Spigone.  After Vetto, the path enters into Ramiseto territory and presses on as far as the Lagastrello Pass, within the confines of the new Tuscan-Emilian Apennine National Park.

Detailded Itinerary:
STAGE 4: FROM CROGNOLO TO VETTO Approximate time: 5.10 hours
Path climbs: 735 metres
Path descends: 750 metres
Distance covered: 13 km Restaurant and coach rental at Pineto. Trattoria at Spigone. Hotels, restaurants and public transport to Reggio Emillia and Castelnovo né Monti at Vetto. FromCrògnolo follow the track E until you reach the pretty tower house at Lesignola 370 m. The road drops to the Tassobbio at Mulino di Chichino 306 m (0.40). Take the left fork and cross the bridge over the river Tassobbio. Turn left after the bridge (the walk to Scalucchia leaves here to the right, path 670), the path climbs and crosses the wooden bridge over the river Tassaro, leaving a footpath on the right for the nearby Tassaro waterfall (10'). After crossing the stream, the track starts to climb to the right. After passing by the fields, the path follows the old route on the track that climbs up to Crovara Church 470 m (0.30; 1.10), at the foot of the hill with the ruins of what once was one of the most dominant castles in the Enza valley. From the church, continue SW along the tarmac road as it drops gently down towards Val Tassaro, almost as far as the tall bridge, 425 m where the Riolco joins the Tassaro. Take the left fork just ahead of the bridge, onto the track that climbs up the hill to a pass at 562 m. It continues E down into a valley on the other side where you pass by a hamlet and enter Legoreccio from the right 531 m (0.50; 2.00). A visit to admire the Da Palude court and the Terzi tower house is recommended. Turn S and leave the Da Palude court along the old mule track (called the "Salt road") towards Santo Stefano and Castelnovo, as far as the fork. Turn right and climb up and over the hill. Enter the wooded Riolco valley and follow the path across the hill amidst Scots pines, downy oaks and juniper bushes. Once you arrive at Casa Spiaggi, the path goes down and fords the Riolco before climbing sharply back up at Pineto 683 m (1.00; 3.00). Here it meets the Tassobbio Path, n° 660, coming from the left. Pineto and the Da Palude house are worth a detour. Enter the village and turn left immediately before the Serena Trattoria (if you continue straight on, the mule track will take you to Scalucchia). Walk down the old town road towards Spigone, crossing large meadows before entering the chestnut woods, again descending. The chestnuts gradually give way to beech trees, and the path drops steeply down to Mulinaccio 544 m, an old, abandoned mill. Ford the Tassaro river and take the mule track on the opposite bank. After passing through the woods, the track leaves the trees close to the fields and climbs up to Spigone 676 m (path n° 670 to Scalucchia enters the hamlet from the right). Walk up among the houses in the hamlet to the tarmac road in front of the trattoria (0.40; 3.40). Leave Spigone on the road to Vetto, then take the track on the left up towards the mountain crest between the Tassaro and Rio di Vetto valleys. Continue right along the track, circumventing the hill on the left where a medieval castle once stood. The path continues left down to the country hamlet of Bresso 686 m, where a grassy path continues the descent north. The path wanders between hedges and then joins a country road near a house, meandering across the valley. After Casa Giuliani 634 m, continue along the road until you join the tarmac road from Vetto to Spigone, and turn left. After the hamlet of Costa 594 m, there is a hairpin bend and the road descends past houses before arriving at the mule track. Cross the road to Vogilato and continue walking down. After a hairpin bend the path joins a track to the left, leading to Carbiolo Oratory nearby: take the road on the left down to the centre of Vetto 442 m (1.30; 5.10).