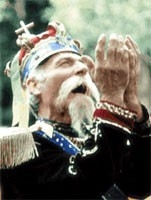 Background Information:
The May song is exclusively a creation of the people in all its aspects. The author is a common man, a rustic muse who interprets the feelings, the passions, the ideals of his people; the actors give life, form to all this, while the people - spectators - actors actively contribute to the success of the perfect animation of its warriors of tin and cardboard. So far we've spoken mostly from a critics point of view, but the May song for the people is another thing altogether. Getting involved in critical observations about origins, development and values makes one lose sight of what the May song is for the people. To go to the May song is not like going to the theater or the movies. The may song is a collective feast like the Patron of the parish. The comparison with ancient Greece, where the people participated an entire day in theatrical performances is automatic. This participation had a rite-like character. The same goes for the May song participation, from the smallest to the oldest. It is the entire community of mountain centers which gathers together for festivities. I think that the proper word is exactly this, a festival of sun, scent, of light and in the middle of all of this a serious and committed game, which reflects one's proper life in its most profound aspirations.
(Walter Cecchelanì, Degree thesis, AA.VV., 1966 - 67)