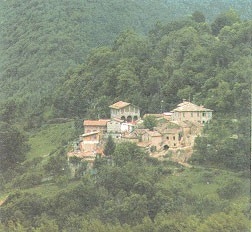 Accessibility
Distance from Reggio Emilia: 39 km.
Route:
You arrive in Vetto taking the SP 28 up to Cavriago to then continue on the SP 22 up to S. Polo d'Enza from here you take the SS 513 for Vetto

Description:
It's a municipality of the medium height Reggiano Apennines, Vetto boasts a good position, high up on the right bank of the Enza river in a basin at the foot of Mt. Costa and Faille, natural balcony of the entire valley.
Its fractions have maintained architectural and environmental characteristics which cannot be found in the rest of the Reggiano mountains. The first documented information on the existence of the village does not go further back than the 12th century, but a deeply rooted local tradition insists on its having Roman origins, based essentially on reliefs of a toponymic nature.
Vetto, in fact, would derive from the Latin "vectus", conducted, transported, with reference to the place where you cross the river, otherwise it could refer to anther more improbable foundation by the noble family of the Vetii.
Vetto is surrounded by chestnut, oak and pine woods and is punctuated by the antique constructions of "il Borgo", "il Castello" and"Cà Boccio", small houses which, one next to the other, form the background of the San Lorenzo church and recall perhaps the ancient fortified structure.
The church, of pre-Romanesque origins, was restructured in 1620, remodeled in 1930 and partially renovated both on the inside and the outside in the last twenty years. Besides the 17th century "barrel vault" of the apse and a cornice of the beginning of 1110, the Vetto parish retains a tabernacle and a small cupboard of 1500 and 2 confessionals of 1600.
Noteworthy in Via Micheli is the portal of "Casa Agostino", the first residence of the Municipal Administration.
On the stone the year 1859 was engraved with the caption "Viva Vittorio Veneto Secondo, nostro Re e prode soldato – Viva il generoso Napoleone III – Viva l'invincibile Garibaldi".
On the keystone the Savoia coat of arms stands out. A few meters away is a nice ogival portal which introduces onto the court of the "Trattoria Impero" a massive tower house of the 1600, better known as "Osteria di Turro". Nearby the ruins of a more antique town are noticeable and you can see a few narrow windows.
A second tower house stylistically referable to the 16th – 17th century can be found on the western edge of the village and is flanked by a court with an original portal.
In central Via Manenti there's aspire of a vast portal which remains, and is ornately decorated and engraved with vine – tendril roses and the year "1790".
Besides the portal you can see a niche with marble icon probably of the 19th century and a raised portal with composed jambs.
A second majesty is Via San Lorenzo is characterized by a niche with a Carrara marble icon depicting the Blessed Virgin.
A little more than 1 km away from Vetto, from the pebbly shore of the Enza there rises the contour of the "pontaccio". (bridge)