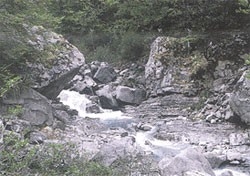 Accessibility:
You get to Cerreto Alpi taking the SS 63 in the direction of Cerreto Pass.
It's 6 km from the administrative capital.
The route begins in the town near the cemetery.

Description:
the path begins in the Village of Cerreto Alpi (930 m), near the graveyard and follows a paved road (with base in stone) which leads to the chestnut woods, within which you can still see a few "metati" (small stone structures which were used to desiccate chestnuts). Following the Riarbero torrent you reach the ironworks, where in ancient times iron was worked on, it was brought over from Tuscan mines. Along the valley you will come across a coppice wood of beech and you will encounter areas which have cavernous limestone evaporating riddled rocks which were deposited about 200 million years ago) and rocky outcrops that have a chaotic aspect. In the end you will reach the village of Vaglie (980 m), in the Ligonchio municipality. The river
The modifying action of the water happens through erosion, transportation and sedimentation of rocky material. In areas where the force of the current is stronger the flow of water carves its own river-bed in the rock. The Riarbero torrent flows through rocky sandstone banks, caving them, modeling them and provoking the detachment of a few big fragments. History
At the end of the 1400's in Garfagnana the ironworks, or Estensi iron foundries of Vallico and of Fornovalasco, were created at the end of he 1500's, it was a man from Garfagnana who initiated construction of the Rialbo Ferriera. The iron ore was transported on the backs of mules from Elba Isle through the Cavorsella Pass, and the cast iron was bought in Florence and Follonica. Water from the Riarbero was used as a propelling power for the power-hammers, grinders, and bellows. Vegetation
Riparian vegetation characterizes the shores of the water courses: on the alluvium, in the bends and on the shores of the torrential river-beds little woods of White Alders, Red Willows with woolly leaves can form. These formations can be destroyed by floods but, thanks to their rapid growth, to the spreading of their seeds in water and to their vegetal propagational abilities (Talea, cutting) within a few years they can colonize the more recent surface and form small woods. Geomorphology
The aspect of the landscape is the result of processes which have modeled it and which constantly mold it. The sides formed by tenacious and resistant rocks, such as is sandstone, are slowly molded and also supports steep, vertical walls. Spectacular examples of this morphology are the "Schicchi" of the Secchia, Ozola and Riarbero rivers. The glacial molding having ceased, fluvial erosion has produced true and proper gorges, profound incisions in the rock which exceed a hundred meters in height. Fish fauna
The clear, cold and highly oxygenated water of the initial part of the rivers are an ideal environment for the Fario trout, Vairone, and Barbel. Recognizable for the presence on its sides of red marks surrounded by a light glow, the Fario trout is an active predator. Fry, invertebrates, small fish and amphibian larvae make up its habitual prey. In a few torrents, streams and lakes of the Park, you will find the river crayfish: a species which indicates good quality water, it isn't easy to see.
(Nature Path 18).